skip to main | skip to sidebar

I've found that a lot of the time with Nikki, I have to be very careful of applying any "generalized" cat-theory to her, and to be hyper-vigilant about making sure I stop doing something no matter how many books tell me "oh, cats like it!"

Nikki, you see, defies a lot of "cat-dogma", and until quite recently I found the particular combination of things she reacted "unusually" to rather odd and surprising. 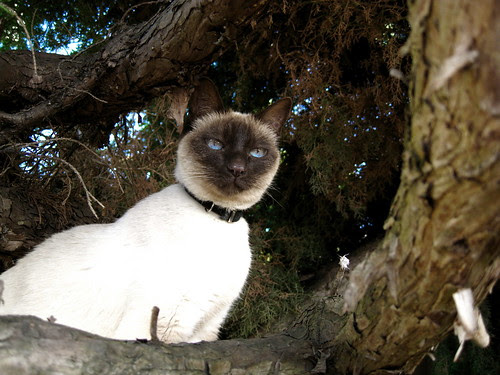 Case in point: the catnip thing. Nikki is a catnip "responder", meaning it's clear she is at least somewhat affected by the stuff. However, she doesn't seem to particularly like the effects of nepetalactone, and in fact will go out of her way to avoid being "taken in" by the Catnip State.

After she'd settled in somewhat, I offered catnip to her on multiple occasions, hoping she'd find it to be a source of fun -- but instead she seemed to get angry at it, sniffing it and then either whacking the scented object away with a hiss, or running away from it in the opposite direction.

And up until now I've never seen a cat react this way to catnip, ever. All the other cats I've known either ignore it (the non-responders) or love it. But not Nikki. She has her own way of responding, and she's made it clear that she doesn't want to feel however the catnip makes her feel. So I don't offer it to her anymore (though she is free to go seek it out if she feels like it).

Another case in point: "feline facial pheromones". These are supposed to be the "calming" chemicals secreted by cats in their cheek, chin, and forehead areas -- the depositing of which accounts for the feline habit of head-rubbing on familiar objects when they're feeling relaxed.

The first time I saw Nikki's reaction to these pheromones was when I was doing the whole "scent mixing" thing I'd read was important for making introductions between unfamiliar cats. I'd taken a glove and petted the younger cats on their faces with it. Then I went into Nikki's room and let her sniff the glove. She proceeded to remove the glove from my hand with a single paw-swipe, accompanied by a hiss.

At the time I figured she was probably just not happy about smelling (then) unfamiliar cats. But then, a while later, after she'd been given the run of the house along with the others, I got the idea of trying some Feliway spray in an effort to give Nikki some "safe" areas for napping, etc., where she could go and feel comfortable and secure.

I'd read that cats will supposedly interpret these synthetic facial pheromones as identical to their own, and from my human perspective, I saw using the spray as a sort of "prosthetic" means for me to go around making certain objects smell homey and non-threatening (seeing as I don't have cat-glands in my own cheeks and chin!).

But, in what was beginning to look like yet another element in a pattern, Nikki did not seem to appreciate the Feliway. At all. Her reaction to it was very similar to how she reacted to catnip -- the "get this stuff AWAY from me!" response. And then, rather than wanting to go sit in the areas I'd Feliway-ed, she avoided those areas for weeks -- probably until the synthetic pheromones dissipated.

So, for a while those "odd" reactions to things cats are reputed to "like" really puzzled me.

I was also puzzled at Nikki's apparent "moodiness". Yes, I know cats --particularly Siamese cats -- have sort of a species reputation for this, but most of the time it's been pretty evident to me that they aren't reacting randomly to things, and I tend to get annoyed at humans who talk about cats like they're all completely enigmatic and inexplicable. And I wasn't presuming that Nikki was having "random" reactions either, but I was definitely getting perplexed by the sheer frequency and intensity of her emphatic announcements.

Sometimes she seemed to just be screaming at me (using every cubic centimetre of her formidable Siamese lung capacity) for "no apparent reason" (even though SHE clearly had a reason). Other times, she just seemed to be irritated at everything and everyone. She'd go stomping around the house, making these little "harrumph" noises and swatting at the other cats if they got in the way of her circuit.

Some of this I attributed, probably correctly, to the fact that she was still adjusting to having moved (after eight years in the same home, with the same humans), and to the presence of three other cats. But that didn't account for all of it. And I knew it wasn't a medical issue, because she'd been pronounced impressively healthy for her age at her last vet visit in January. And she always has food, fresh water, and clean litter. So I was at a loss to explain what the heck was going on. And I was feeling guilty and frustrated at myself for not knowing what she was telling me.

But then, one evening last week, something changed. Nikki found a way to communicate with me that was...pretty unmistakable (and no, it did not involve urine).

I am still not sure how she did it, or even exactly what she did to get her message across. Maybe someday I will be able to describe the mechanism (as I'm sure it was something perfectly mundane as far as cats are concerned), but I can't yet, so I will just skip to the result. And the result was that my brain completely paradigm-shifted and I realized that everything about her behavior that had seemed "weird" or "frustrating" to me made total sense when I looked at her in the vocation of a security guard.

In other words, the patrolling, the seeming annoyance at the other cats "interfering" with her work, the extreme dislike of anything that altered her perceptions or seemed to "trick" her...it all suddenly fell into place.

So, I did what anyone whose cat has just told them the feline equivalent of "you know, you've been awfully dense about all this!" would do: I said "Thank you". 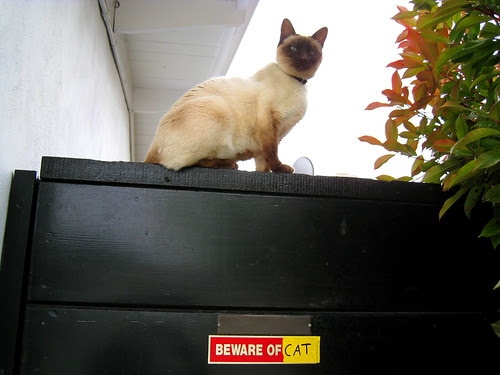 And as odd as this may sound to some, I actually do feel safer knowing Nikki is on patrol.
Posted by Anne Corwin at 9:31 PM

This blog has been archived and can no longer receive comments.

Anne Corwin
I am a small piece of the universe observing itself. In this capacity, I am an engineer, science geek, sf/fantasy fan, amateur artist, cat appreciator, hyperlexic infovore, and maker of various and random quasi-functional objects.

About "Felines Are Wonderful"